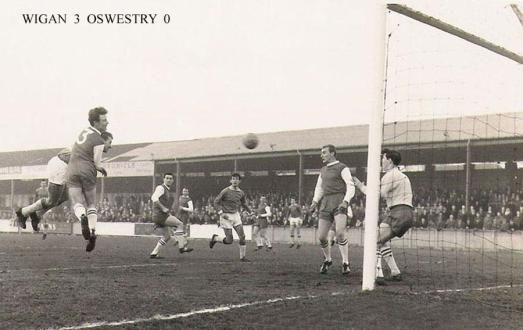 Harry Lyon latches on to a Walter Stanley (third from right) cross. Carl Davenport lurks for any rebounds.
Photo courtesy of WiganWorld.

In the mid 1960’s Allan Brown’s Wigan Athletic team played the kind of football fans liked to watch. There were two excellent wingers, Les Campbell and Walter Stanley, who would put over a stream of tantalizing crosses for the twin strikers to feed on. No wonder that Latics scored 121 goals in the 1964-65 season, when they won the Cheshire County League. Harry Lyon led the scoring with 67 goals in all competitions.

Football was an attacking game in those days, with 4-2-4 prevalent.

Then came England’s World Cup victory in 1966. Alf Ramsey’s team played without wingers, the ‘wingless wonders’ . They packed the midfield with four players, leaving just Geoff Hurst and Roger Hunt up front. With the rugged Nobby Stiles playing the role of  ball winner in front of a back four marshaled by the superb Bobby Moore, England were a very difficult team to play against. Ramsey’s success was based on solid defence, but he also had a superb midfield general and match winner in Bobby Charlton to help generate goals. 4-4-2 was to become the norm for years to come.

Fads come and go, especially football formations. Putting labels on formations is always tricky, as would be the case in Paul Jewell’s side that won promotion to the Premier League in 2005. Dave Whelan had forked out what was a lot of money at the time for twin strikers who would both score more than 20 goals that season.The names of Nathan Ellington and Jason Roberts are etched into the history of the club.

They were fed from the right wing by Gary Teale, as Campbell and Stanley had supplied Lyon and Davenport some forty years before. However, on the left flank was converted centre forward Lee McCulloch. McCulloch could not in any way be called a winger – his role was to bolster the midfield and ghost in at the far post to poach goals, with the opposition defence being occupied in coping with ‘The Duke’ and ‘JR’. The formation they played was usually referred to as 4-4-2, but it could be argued that 4-3-3 was a better descriptor.

Wingers are back in fashion in modern football, although they are expected to play their part in defensive duties too. But many managers shun the idea of playing with twin strikers, preferring to deploy a lone centre forward with support coming through from midfield. Up against two central defenders the lone centre forward has a difficult job. He is not only expected to hold-up the ball when he is almost always outnumbered, but also to score goals. Inevitably the goalscoring ratio of the modern centre forward, in terms of goals per game, has dropped over the years.

In terms of holding up the ball Marc-Antoine Fortune is the best centre forward that Latics currently have. However, his goalscoring ratio for Latics is low even for a modern day lone centre forward – a meagre 1 per 10 games. Although Fortune’s career average is higher – almost 1 in 5 – it is bettered by those of Andy Delort (1 in 3.4) and Oriel Riera (1 in 4). How much longer will Rosler continue to play Fortune at the expense of the other two?

If one trawls the social media and fan forums there are lots of supporters who advocate the kind of attacking approach that uses two wingers with two central strikers. Many refer to it as playing 4-4-2 although it is probably more akin to the older 4-2-4. Over these pasts weeks several fans have advocated starting lineups that include Callum McManaman and James McClean on the wings and Delort and Riera as twin strikers. It brings back memories of the days of Allan Brown.

But it is something that is unlikely under Uwe Rosler or any manager who might succeed him. Most prefer the security of a packed midfield rather than risk putting too many players far forward. Were Rosler to suddenly have a paradigm shift and choose such an attacking formation the reality on the pitch would be something different, with players having to drop back to help a beleaguered midfield?

Some managers like to stick to a set formation and recruit players who can fit into it. Rosler is not one of those. His players are expected to adapt to whatever formation he decides upon, which in turn can often depend on the opposition his team is to face. Having a set formation has its advantages. Roles are clearly defined and players can slot seamlessly into the system. However, it also makes it easier for the opposition to plan their strategy well in advance.

So far this season we have seen formations that can be broadly labeled as 3-5-2, 4-3-3 and 4-4-2. In recent games Rosler has operated a modified 4-4-2. He has deployed three central midfield players, with Roger Espinoza playing further forward than the other two. He has used Don Cowie in right midfield to provide cover for the attacking runs of James Tavernier from the full back position. Fortune has played the target man role with Callum McManaman in a more fluid attacking role.

From time to time Rosler has used a 4-3-3 system with two genuine wingers in McManaman and McClean. The formation offers balance, together with a direct threat to the opposition defence coming from both sides of the pitch. However, both McManaman and McClean need to see a lot of the ball to be effective and this has not always happened. An alternative would be to use Shaun Maloney and Martyn Waghorn in wide positions, with a tendency to move inside. Both have been more consistent goalscorers than McManaman and McClean.

There are those who do not like the 3-5-2 system. They say that it often reverts to 5-3-2 with the wing backs not supporting the forwards. But when properly put into practice it can yield good results. Moreover the squad is well stocked with good quality central defenders and Rosler has lots of options when choosing a back three. He has the aerial power of Leon Barnett and Thomas Rogne to counter those teams who rely on route one football. In Emmerson Boyce and Ivan Ramis he has players who have proved themselves to be as good as any central defender in the division.

Some players thrive more in some tactical formations more than others. James Perch is a solid and dependable right back who has worked hard when pressed into action as a wing back. His attacking play has undergone a significant improvement over the last year. Perch is a fine athlete with good lungs, as evidenced by goals he has scored through getting into positions where he would not have been expected to show up. However, Tavernier has more to offer going forward. His delivery is so often of real quality. But he needs to work hard on the defensive aspects of his game.

One recalls the promise of Ronnie Stam going forward, but he just did not have enough defensively, even as a wing back. At this stage Tavernier looks a good possibility as a wing back or as an attacking option at full back later in a game. Perch remains the best option at right full back.

With three games in less than a week Rosler has already made it known that he will be rotating his squad for the away games at Brighton tomorrow and Bolton on Friday. Delort and Rogne made appearances for the development squad last week and are likely to feature in at least one match. It is to be hoped that Maloney‘s goal against Fulham will help to kick-start his season, which has been disappointing up to this point. Waghorn was a key element of Rosler’s system last season, but has seen little action up to this point. Riera too has seen little playing time over recent weeks and is overdue to return.

Latics have looked at their best this season when they have been able to deliver the high pressing game that the manager espouses. The ability to do that seems to outweigh the tactical formation he chooses to adopt. 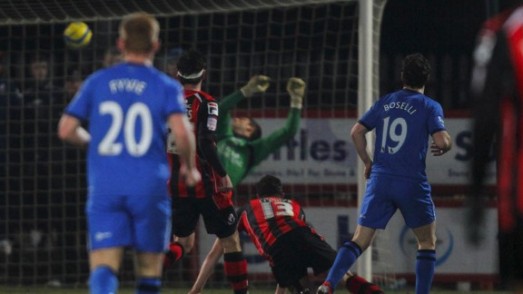 Mauro Boselli’s rocket shot at Bournemouth on Tuesday was eventful in more ways than one. Once more he showed the kind of clinical finishing that Latics have desperately lacked in the Premier League this season. The big question is whether he will ever be able to show such finishing in the Premier League. Roberto Martinez has been reluctant to put him in there, but has the time come for a change of heart? In any event, Boselli’s goal was enough to beat Bournemouth and set up a fascinating match at Macclesfield.

Macclesfield Town is a special name for those Wigan Athletic supporters who remember the club’s non-league era. My first sight of the ‘Silkmen’ was at Springfield Park in autumn of 1961, when the reigning Cheshire County League champions were visiting. Latics had only just got back into the league, at the expense of Wigan Rovers, after being relegated in 1947. However, they had finished in second place in the Lancashire Combination and were holding their own in the Cheshire League.This match proved to be a rude awakening for Wigan. Macc’s silver-haired player-manager, Frank Bowyer, led his team to a 4-1 rout. Macclesfield were to finish second and Wigan fifth at the end of the season.

Macclesfield proved to be formidable opponents for Wigan over the next couple of decades. A visit to their Moss Rose ground was to be feared and Latics often came unstuck there. One exception was a Boxing Day fixture on a snow-bound pitch in 1964 when Carl Davenport’s volley was the difference between the two sides. That was the season when Harry Lyon scored his 66 goals and Latics won the league, Macc finishing second. Both Wigan and Macclesfield joined the newly created Northern Premier League in 1968, each club winning the championship twice before Wigan got elected into the Football League 10 years later.

The fortunes of the clubs have differed greatly since those days. Wigan are in their eighth season in the Premier League and Macclesfield back in the Conference after 15 years in the Football League. There are people who knock Wigan Athletic’s success, but the reality is that Latics are four divisions above their old rivals. A remarkable achievement.