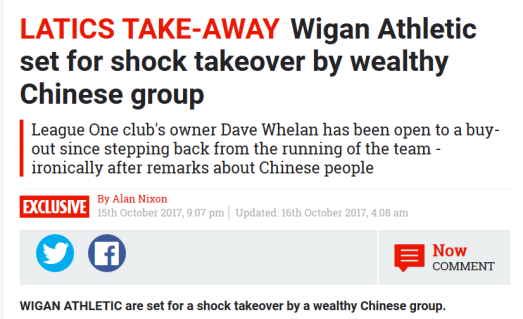 The Sun newspaper’s revelation that Dave Whelan is about to sell much of his majority shareholding to a Chinese consortium does not come as a surprise. As far back as April we published an article regarding such a buy-out.

But if the thing actually does happen over the coming weeks will it affect the promotion push under Paul Cook and is it something that could prove beneficial in the long-run?

Cook is no stranger to such events. Indeed he found himself in a difficult situation at Portsmouth over summer with American billionaire Michael Eisner in the process of buying the club. There was talk about Eisner bringing in a Director of Football above Cook, but more than anything else the manager was caught in a situation of uncertainty. It was surely a major factor in his moving to Wigan.

There is speculation as to whether David Sharpe would continue if the takeover materialises, possibly with a minority shareholding in the club. Such a move would be welcomed by most supporters who would see it as a means of ensuring a degree of continuity.

The Sun’s report did not mention a particular critical item regarding a possible sale. The DW Stadium is not owned by Latics, but belongs to a company controlled by Whelan. It is unlikely that a consortium would want to buy a club unless it had a stadium to play in. Would a stadium sale happen concurrent with the sale of the club? Or would Whelan come to a long term agreement regarding the rental of stadium facilities?

In the meantime Latics play at Gillingham tomorrow night and Blackpool on Saturday. It is to be hoped that the news will not upset the positive mood among the players and Cook and his staff.

Assuming that Cook stays promotion is a strong possibility. It is to be hoped that any possible ownership changes will not upset the momentum that Latics have gained on the field of play over these recent months.