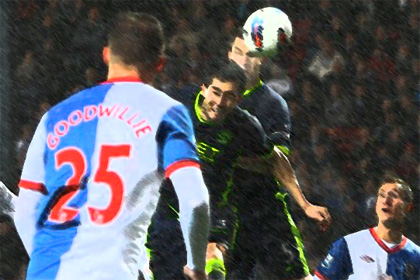 Wigan Athletic will be in the Premier League for an eighth straight year, crowning a truly unbelievable run of results with an away win at Ewood Park last Monday. A draw may well have been enough from the Latics perspective, but Antolin Alcaraz’s late headed winner was fair reward for another display of cultured, confident passing in difficult playing conditions, in a venue that had not been kind to the Latics in years past.

Anything but a win would have spelled the end for Blackburn, a club in free-fall, but they seemed to have accepted their fate from the outset. This is a club in crisis from top to bottom. Injured and demoralized players, furious fans, inept management and clueless owners — however dire our season may have looked two months ago when we were relegation certainties, it never approach that sort of madness.

And so the first half was all Wigan, with Franco Di Santo and Victor Moses both going very close and Ali Al-Habsi only called into action to catch a stray chicken. If the Blackburn support deserves credit for one thing this season, it is for smuggling that chicken past security.  They did find their voices in the second half, however, and were unlucky not to be celebrating a penalty when Emmerson Boyce tangled with Junior Hoilett in the box. Indeed, there was a nervy period in that second half when Blackburn pumped the crosses in from every angle and Wigan rode their luck, but the initiative was swiftly regained in the final quarter and victory was sealed, ironically, off a set play header.

But you knew most of this already. Lets take this moment to celebrate a truly unbelievable couple months for the club.

A fantastic away performance. Dominant in the first half, resolute in the second, and fit enough to win it late on a very heavy pitch. A goal from a corner. The team has become stronger at both attacking and defending set plays. Of the starting XI, only Emmerson Boyce and Maynor Figueroa were not Roberto Martinez signings. He has slowly but surely built a team of his own at Wigan. Congratulations to him and his players, whose commitment and skill have earned the best results and highest-level of performance in the club’s history, after a very difficult season.

It is never fun to watch another team and set of supporters go down.

Ali Al-Habsi: 8 — Dealt well with the chicken, and made one or two important saves when the pressure was on in the second half.

Emmerson Boyce: 7 — Almost gave away a penalty but otherwise good.

Antolin Alcaraz: 9 — Outstanding performance, capped off with the winning goal. His absence for most of the first half of the season was a huge factor in the team’s poor form.

Gary Caldwell: 8.5 — Captain fantastic was honoured with the Fans Player of the Season award in midweek, and truly deserves it. Solid again.

Maynor Figueroa: 8.5 — Honoured by his fellow players as their player of the year, a tremendous achievement for a player who has enjoyed his best season in a Latics shirt.

Jean Beausejour: 8.5 — Caused Blackburn trouble with neat footwork down the left, and supplied the cross for the winning goal.

James McArthur: 8.5 — Gets better and better, his passing is thoroughly efficient and neat, but he also has an eye for a through-ball when he gets forward. Really looking forward to watching his continued growth next season.

James McCarthy: 8.5 — The only thing he is lacking from his game is a goal or five. Unfortunately, as soon as he starts producing those, someone will snap him up. The complete midfielder.

Shaun Maloney: 8.5 — Another bright display by the little magician.

Victor Moses: 8.5 — They couldn’t handle him, but his finishing was not the best this time around.

Franco Di Santo: 8.5 — Decent game with some great build-up play, but missed a great chance in the first few minutes of the game.

Conor Sammon: N/A — Might have gotten on the end of a beautiful right-wing delivery, but otherwise didn’t see too much of the ball. A likeable player, but how much longer will he be given to prove himself. A striker will surely be signed this summer following Rodallega’s departure.