In the dying minutes of the January transfer window Wigan Athletic signed Grimsby Town centre forward Omar Bogle. The transfer fee is reputed to be in excess of £1 million.

On signing Bogle Warren Joyce said: “Omar is a finisher, and he has scored goals at every level he has played at. He needs to take it to the next level now but we are convinced he has the attributes to be a success here.”

Bogle added: “I owe a lot of Grimsby Town, the chairman, the gaffer, my teammates and the fans, who were great with me. I’ll always appreciate their support.I’ve handled the step up from the Conference and have done well this year, but that’s testament to the gaffer at Grimsby and the players I had around me.I’m quite a direct player who has attributes in every area. I’m quick, strong, put myself about a bit and have the ability to really beat players. I want to excite the Wigan fans. I’m ready for the challenge of stepping up to the Championship. It’s a new environment for me playing against bigger teams and the standard will be higher, but I’m definitely ready. I want to thank all the Wigan Athletic fans for their support on social media. I can’t wait to excite the crowd and do well for this club.” 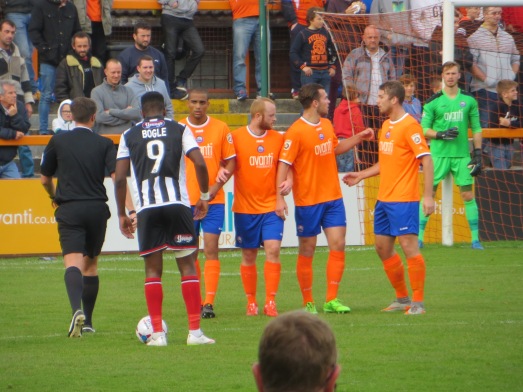 Bogle lines up a free kick against Braintree in October 2015.

The 23 year old Bogle, who is 6 ft 2 in tall, was born in Birmingham. After being with West Bromwich Albion’s youth system in his early teens he passed through the Birmingham City Academy before joining the Celtic Academy for a year. After a one year spell at Hinckley United he joined Solihull Moors where he went on to spend three years. In 2014-15 he was the Conference North Player of the Year, being top goalscorer in the division with 29 goals.

Bogle scored 62 goals in 111 appearances for the west midland club before signing for Grimsby Town in summer 2015. He went on to score 16 goals in his first season, including two against Forest Green Rovers in the National League playoff final, which Grimsby won 3-2. Bogle started the next season well, being League 2 Player of the Month in both August and September 2016. He went on to make  a total of 68 league appearances for Grimsby, scoring 32 goals.

In order to learn more about Bogle we contacted Paul Ketchley. Paul is a regular contributor to the independent Grimsby Town fanzine  Cod Almighty.

Paul not only gave us his insights through a Q and A session, but sent us the photos featured in this article.

Here’s over to Paul:

Where did you get him from?

As you know we picked him up from Solihull Moors for something around £30,000. Last season he and Padraig Amond (now at Hartlepool) struck up a partnership that went together like haddock and chips. That’s the way it should be by the way. They are why we are back in the League.

How good is he?

On his day and providing you play to his strengths he’s a match winner. Won the play-off final for us last year to get us back in the League and has only got better this season. Play him along a little guy and he’ll make as many goals for them as many as he scores himself. Padraig Amond’s 30+ goals last year were also the result of having Omar alongside him

Have Wigan paid over the odds?

We think that you’ve got him at a bargain price! If it’s between £1 million and £1.5 million he’s worth at least that. We hope we’ve got a big sell-on clause in the deal.

Will he do any good in the Championship?

Providing you play to his strengths he’ll terrify opposition defences. He likes taking free kicks by the way.

Can Wigan send him back if they don’t like him?

There’s nobody at our end who is glad to see him leave. We realise that this is how football is these days. So, Omar will be welcome back any day.

How do you welcome him?

Start playing Blur’s “Tender is the Night” to practice the Omar Bogle anthem. The “oh, my baby” bit.