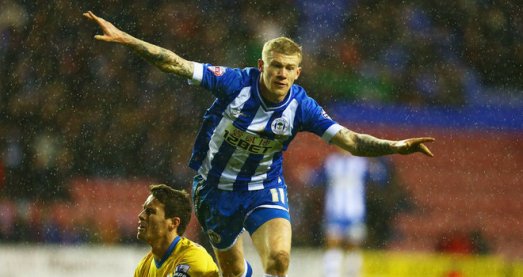 McClean completes the first of his two goals.

Wigan Athletic notched their sixth successive away win with a convincing performance at Portman Road.  Latics were almost unrecognizable from the jaded side we saw in midweek against Sheffield Wednesday. This time they were full of energy and their pressing forced the home team into a series of errors.

Uwe Rosler resisted the opportunity to rest any of his defensive regulars – Leon Barnett, Emmerson Boyce and James Perch. Ivan Ramis came in at centre half with Boyce switching to right back and Perch to the left back position. Marc-Antoine Fortune replaced Nicky Maynard up front.

Ipswich were lively in the early stages and took the lead after 19 minutes when central defender Tommy Smith hooked in a loose ball into the right hand corner of the net following a melee in the penalty box. Their play had been typical of that of a Mick McCarthy side, with crosses raining into the Latics box.

Latics equalized within two minutes when James McClean latched on to a great cut back by Fortune to score an opportunist goal. The goal spurred Latics on and it was no surprise when they got their second in the 42nd minute. Jordi Gomez put in beautifully flighted free kick from the left, Ipswich keeper Gerken did not go for it and Barnett headed home.

At half time some Ipswich supporters opined that their team never does well against big physical sides like Wigan. There was some truth in their assertion in that Latics had more height in their team, but the reality was that after McClean’s goal Latics were winning almost all of the fifty-fifty challenges> Moreover Ipswich kept putting the ball in the air. Being an ex-Norwich player,  Barnett was subject to jeering from the crowd, but he and Ramis had started to gobble up the high balls and stifle the home team’s limited tactic.

Ipswich came out in the second half with fresh resolve, but Wigan’s experienced and very capable back four held firm.  Jordi Gomez was pulling the strings in midfield and Latics looked dangerous on counterattack. At one stage Martyn Waghorn broke through from midfield with two teammates in close support. A goal was on the cards, but Wigan were thwarted by a last ditch challenge by the classy Aaron Creswell.

Latics brought on Nick Powell for Martyn Waghorn after 63 minutes, the youngster occupying that same wide right position. Another Wigan goal was on the cards and it came in the 77th minute. Fortune had fought relentlessly against Ipswich’s robust defence and once again he broke free. Gomez had won the ball and released the French Guianian on the right. His superb low cross eluded the home defence to be hit home with glee by McClean.

Barnett had been taken off with a hamstring injury after 74 minutes with Rob Kiernan moving into his central defensive position. Stephen Crainey came on for McClean after 82 minutes in a left wingback position, with Perch moving to the right and Boyce joining Ramis and Kiernan in a central defensive trio.

The defence held firm and Latics got a well-deserved three points. They had been both technically and physically superior to the home side.

Midway through the second half when an Ipswich player got the ball in his own half close to the half way line. He was immediately surrounded by three Wigan players and ended up skewing his pass out of play for a Latics throw. It was an indication of the high pressing that Latics had been operating, making it difficult for the home side to get any coherency to their play. It is the hallmark of the Rosler era.

Following a shaky start the back four were excellent. Ramis and Boyce oozed class, with Barnett and Perch being their usual competitive, combative selves.

James McArthur played a valiant defensive role in midfield, partnered by Ryan Tunnicliffe who looked more comfortable than in midweek. The Ipswich supporters hold him in high regard from his time there in the first half of the season. It is going to take him some time to reach the levels of Chris McCann and Ben Watson, but this was a step forward for him.

Gomez has become a new player under Rosler, working as hard as ever, but now more and more resisting the back pass. Some of his passes did not quite come off, but many were made under pressure and were well intentioned.

Waghorn was a hive of industry as always and helped Boyce resist the treat of Cresswell and company on the Ipswich left. The enigmatic McClean was his usual positive self in terms of his running and commitment but this time he got into good scoring positions. His first goal was very well taken, with a right foot he rarely uses. He looked dangerous throughout.

Rosler took a gamble playing his three regular defenders whose bodies must have taken a physical toll after so many games in recent weeks.  He clearly wanted to win this match against promotion rivals, but now is paying the price. It is not known at this stage how long Barnett’s injury will keep him out, but Rosler now faces having to disrupt his back four. Boyce, at 34 years of age, is clearly due a rest, as is Perch, so Rosler will face a dilemma for Tuesday’s game against Yeovil.

Ali al-Habsi: 7 – did all that could be expected of him.

Leon Barnett: 7.5 – superb in the air, solid no-frills in defence. Will be sorely missed in his recuperation from injury.

James Perch: 7.5 – moved across to the left, but this consummate team player did not let the team down. Very solid in defence.

James McArthur: 7 – did not find much space for his passing game, but his workrate and tackling was important.

Ryan Tunnicliffe: 6 – continues to adjust to the style of play.

Martyn Waghorn: 6 – a team player who gives his all. His defensive contribution was crucial. An important cog in Rosler’s tactical system.

Marc-Antoine Fortune: 8 – a determined display by the central striker. Took on the physical challenge and made two assists.

James McClean: 8.5 – blossoming under Rosler. Fast, direct and physical he poses a threat to defences. His final ball continues to improve and in this match he showed the kind of finishing that can make him a top player.

Nick Powell: – came on for Waghorn after 63 minutes. Not at his best in a wide right position, but will clearly have a major role in the coming weeks.

Rob Kiernan: – looked comfortable. Likely to be a regular fixture on the bench as he can play in defence or midfield.

Stephen Crainey: – came on after 80 minutes.

Wigan Athletic travel to Portman Road tomorrow to play their third game in six days. They will face an Ipswich Town side currently sitting in 9th place, with ambitions of reaching the play-offs.

On Wednesday Latics scraped out a win against a physical Sheffield Wednesday outfit, courtesy of an 88th minute penalty. However, they have won their last seven matches.

Ipswich will be a tough nut to crack. They have a home record of W9 D4 L4 and under Latics’ old adversary Mick McCarthy they will pose a strong physical threat. He has former Wolves players Sylvan Ebanks-Blake, Christophe Berra and Stephen Hunt in his squad. They will be out to avenge a 2-0 defeat at the DW Stadium in September.

The key Ipswich man to watch is full back, Aaron Creswell. The 24 year old Liverpudlian has two goals and a remarkable eleven assists in the 31 league games he has played this season. He has also had 28 shots on goal, a high figure for a full back. Not surprisingly there has been talk in the past of Latics trying to secure his services. Uwe Rosler will be keen to curb Cresswell’s attacks and will almost certainly place a winger on the left hand side to peg him back.

Latics have had good news this week with Gary Caldwell and Shaun Maloney each playing 45 minutes for the development squad. The bad news was that Chris McCann, a key figure in Uwe Rosler’s plans, will be out for the rest of the season with an injury to the knee cap. McCann was badly missed on Wednesday when Latics midfield could not maintain the quality of possession that one has come to expect. To lose the Irishman so soon after losing Ben Watson is a harsh blow for Rosler.

Rosler will look to field a well-balanced and competitive midfield at Ipswich. It will be interesting to see if he will field Ryan Tunnicliffe against the team for which he made 24 appearances in the first half of the season. Tunnicliffe struggled against Sheffield Wednesday, but he is clearly the type of player Rosler needs to replace Watson and McCann.

There remains the possibility of playing Jordi Gomez in a holding role, something he did at times under Roberto Martinez. Josh McEachran too is in contention, but like Gomez lacks the physical edge that Tunnicliffe might be able to provide. Roger Espinoza remains largely marginalized and Fraser Fyvie’s career has gone backwards this season. Rosler is going to need a midfield enforcer – someone who can help close down a match – and might well choose to employ Rob Kiernan in that role.

Both Markus Holgerrson and Thomas Rogne played for the development squad in midweek. One of them is likely to lineup in the centre of defence, given Rosler’s rotation policy. Emmerson Boyce is due for a rest and Ivan Ramis is likely to step in. Rosler might well revert to a system with three central defenders.

With the return of Nick Powell, Rosler now has a wide range of attacking options available to him. Up to this point he has managed to keep his forwards fresh through shrewd use of the rotation system.

Scott Carson made a successful return from injury at the Etihad and will challenge Ali Al-Habsi for a starting spot. Rosler has the luxury of being able to rotate two quality goalkeepers as he pleases.

Once again Latics will go up against a physical team keen to beat them. In order to match the Tractor Boys physically they are going to have to do a lot of running and much will depend on the ability of a patched-up midfield to give the forwards the service they need.