What an under-reaction there has been from Wigan Athletic fans on social media to the Daily Mail’s news. Why is that so?

For weeks we have been waiting for news of fresh buyers for the club. They have been stressful, difficult weeks for us fans, worrying about the continued existence of the club. The lack of consistent news coming from the administrators and the media has hardly helped to ease an atmosphere of unease.

Gerald Krasner’s interview by a Channel 4 reporter did not go well initially. After having previously suggested a preference for a British buyer he over-reacted to the interviewer’s questions about it. The clip from Channel 4 news can be accessed here. The interview with Krasner appears at the 2:35 mark. Lisa Nandy’s comments on the administrators’ slowness of acquiring new ownership can be found at 3:26.

Reports this morning suggest that Frankel and Kalt have now dropped their offer from £4m to £2m following news of these players’ transfers.

Krasner had stated on the Channel 4 news that:

“The UK owners that I am dealing with have got a history in football. That’s why it would be better.”

My understanding was that the administrators are obliged to accept the highest bid and cannot discriminate between bidders. Does Gerald Krasner have the right to select a buyer based on their history in football? Have these potential UK owners been bidding a higher price than the Americans?

As the process of finding a new owner has dragged on so have the costs to be applied by Begbies Traynor. In mid-August Latics shareholders received an 89-page document entitled “Wigan Athletic A.F.C. (Limited): In Administration”. It contained a series of proposals related to the administration process for the club.

The document contained details of the charges that Begbies Traynor would levy and an estimate of the administrators’ fees: 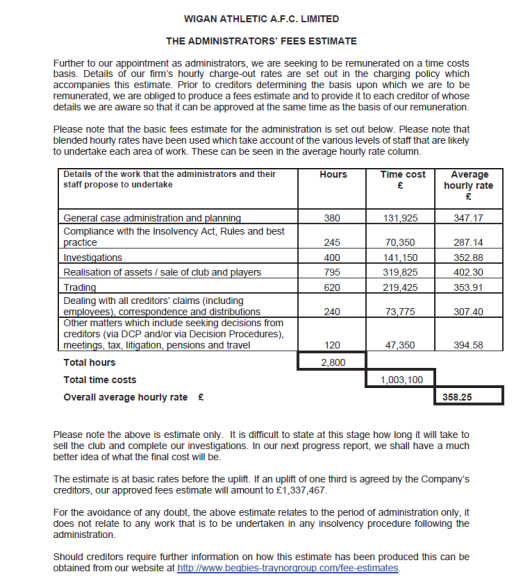 At an hourly rate of some £358 for the duration of the administrators’ involvement is key. Put simply, costs will continue to climb very steeply as long as the process is not completed.

Rumour suggests that 36-year-old Joe Sealey, son of ex-Manchester United goalkeeper, Les Sealey is making a bid to buy the club. Sealey was involved in a bid to buy Macclesfield Town from Amar Alkahdi in January.

The other option working towards Latics’ survival continues to thrive and get nearer and nearer to the half million pound target: a terrific effort.

Meanwhile the preparations for the coming season continue to get better: 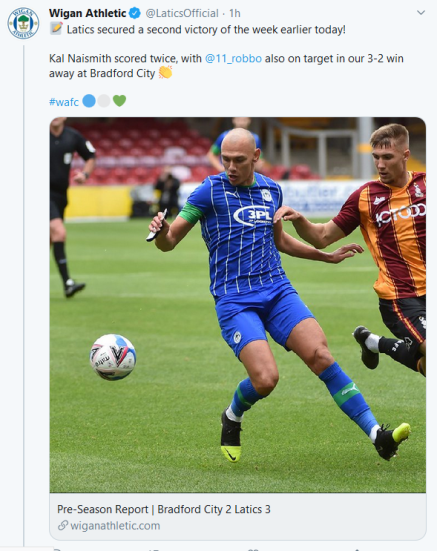