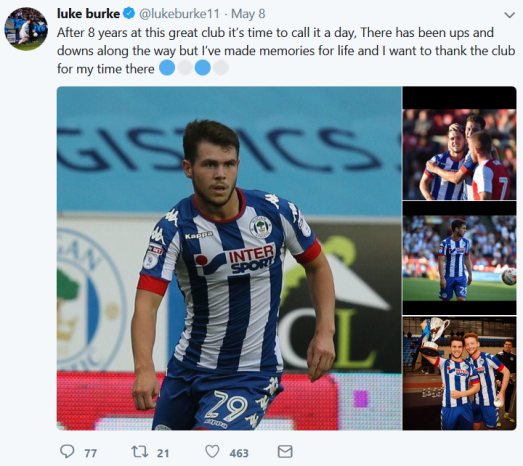 He put a brave face on it, but Luke Burke must have been gutted to be told that he was no longer wanted at Wigan Athletic. Burke was a shining light a couple of years ago, playing Championship football for Latics at the tender age of 18.

In August 2016 he made his debut, starting in the opening game of the season at Bristol City and he looked an accomplished player. Burke had been captain of Latics’ most successful-ever youth team the season before, having played for the development squad when just 16.

But things did not happen as one would have hoped. As the season progressed Burke fell out of the limelight and, in February, Warren Joyce sent him out on a two-month loan to Barrow. That was followed by being loaned to AFC Fylde for the 2017-18 season.

Burke certainly looked to have potential, but his career has taken a step backwards. That 2016-17 season was a difficult one at the club, with the dismissal of Gary Caldwell and the appointment of the inept Warren Joyce. Not an ideal time to focus on nurturing young players. But then again, when is a good time to give youth a chance in modern-day football?

Wigan Athletic give the Michael Millett Award each year in honour of a former youth player who was tragically killed in a car crash in 1995. It recognises the outstanding player in the under-18 team. Callum Lang won it in 2016-17. Lang is a well-built, fast, intelligent central striker who spent the 2017-18 season on loan at Morecambe, where he made a significant impact. The 19-year-old made 30 appearances, scoring 10 goals for the struggling League 2 side. He would seem to have a bright future ahead.

But let’s hope Lang can go further than others who have won that award in recent years. Prior to Luke Burke, Louis Robles won it in 2014-15, Matty Hamilton in 2013-14, Joey Johnson in 2012-13 and Ryan Meadows in 2011-12. None of them made a first team appearance in a competitive game at Wigan and their careers have hardly taken off. But Tim Chow (2010-11) and Lee Nicholls (2019-10) did get first team experience at Wigan and although never regular starters have gone on to play regularly at Ross County and MK Dons respectively.

Looking at the club website there are two players in the senior squad who have come up through the ranks. One is Callum Lang, the other is Jordan Flores. The latter is now 22, having been involved in a serious car crash whilst on loan at Chesterfield. Flores is surely a talent, with that sweet left foot and intelligent movement. What has been lacking in the past has been the physical aspect. The coming season would appear to be make-or-break for the Aspull lad.

The shining example of youth development at Latics over recent years is Leighton Baines. As a 17-year-old in 2002 he made his senior debut with Paul Jewell’s to-be third tier champions a League Cup win against West Bromwich Albion. He went on to make 12 appearances that season, 6 in cup competitions, 6 in the Second Division. Baines went on to an illustrious career, with both Latics and Everton, making 30 appearances for England.

When Luke Burke made his debut at Bristol some long-standing supporters were likening him to Baines. Somehow it did not happen for Burke as it did for Baines. Baines was carefully nurtured by Jewell, given his chance early on, then brought on gradually until he became a top player. Perhaps Burke never really had the kind of potential shown by Baines, but football is so much in the head and in the backing that a player can get from management and good coaching. Or maybe sometimes things are not meant to be?

Burke is still young enough to prove that Latics were wrong in rejecting him. Will he go on to the kind of a career that those previous Michael Millett Award winners have been unable to achieve? We wish him well.

In the meantime we can but ponder on the future of the academy at Wigan Athletic. Some things needs to change if homegrown youth is going to get a real chance at the club.