It was a spirited performance from Latics who made Nottingham Forest look distinctly ordinary. It could be said that Wigan deserved to win after dominating the match. But in reality, it was a familiar tale: a woeful lack of finishing and slack defending leading to a headed goal from a corner. Somehow it looked like Latics would not score, no matter how many chances they had.

Paul Cook has done well in changing the approach from hoofball to real football. But although the tactics are so much better his team selections remain poor. Seeing the team list beforehand we saw once again that Gavin Massey would be deployed on the left wing, where he has previously been ineffective.  Cook persisted with Jamal Lowe who was surely due for some time on the bench after so many ineffectual performances. Rather than play Josh Windass in his best position at number 10 he played him at centre forward. He also decided to employ his three key defensive midfielders, but rather than play them side by side he pushed Joe Williams forward to the number 10 position.

Once again, we saw either square pegs in round holes or players on the field who were not in the best of form. The end result was an energetic performance, interspersed with good football, but with no cutting edge. The attacking players continue to lack not only form, but synergy. The whole was much less than the sum of its parts. 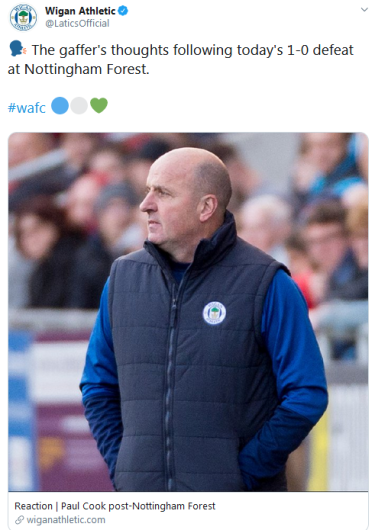 Doesn’t even have the good grace to mention Gelhardt’s performance. I’m sorry Paul, you’ve done a lot of good for this club. But by not walking away a few months ago you’re ruining any remaining goodwill.

It feels like you’re staying on for a big payday. Not making the best decision for the club.

Superb again. Can’t score. Gelhardt very good when he came on. Guess you haven’t seen game. So obvious we have no striker. Forest fans saying best team they’ve seen this season. Team playing for Manager and this run of us playing so well and losing can’t carry on forever.

Playing well… Part of the playing well is scoring goals or at least putting shots on target which could help if we started with a striker on the field or bring him on before the eighty odd minute mark.

Cook must have thought Gary Roberts was going to be a game changer. That says enough with Joffy and Big Joe warming the bench. What an absolutely idiotic substitution.

Reality is, no win in 13, 1 win away for well over a year. A change was needed months ago, and today demonstrated that no matter how well we play we still lose. It is a results business and Cook is not getting them. He is a very fortunate person to even still be at the club. Anywhere else he would have been sacked months ago at the latest.

As for the match, nothing needs to be said, Massey, Lowe, Roberts, and Windass got taught a football lesson by a 17-year-old player who when he came on did more than all of them combined all game. Our attacking players are nowhere near championship quality. Their goal was again from a corner. Meanwhile the corners we took lead to absolutely nothing.

The defence was good, the midfield did their jobs, but as soon as the ball went into the final third, nothing at all, I mean all our good plays actually came from Byrne and Robinson. Massey, Lowe was horrendous, may as well played with nine men.

As for Windass, as soon as he stepped up, it was missed, I have no idea why he takes the penalties. 4 misses in a row now?

I will say the players only have themselves to blame today. I expect Gelhardt to start every game from now on as we need results and he is our only good attacking player. But Cook has had a generous amount of time now, it’s not going to improve, he needs to be ridden before the new year. Royles show some spine and do the right thing by the club. It is when you play well and lose which is the big worry.

For the first time in my Tics supporting life, I honestly don’t even care anymore. Not bothered in the slightest – same old, same old.

This will continue to happen – week in, week out – until we are relegated/a managerial change is made. End of story.