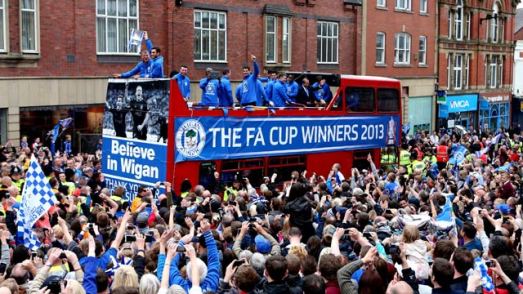 No sooner had the dust settled on Wigan Athletic’s FA Cup semifinal success over Millwall a month ago than a notion started circulating that the Latics could become the first club to win the FA Cup and suffer relegation during the same season.

Deep in their hearts, most Wigan supporters suspected that the combination of defensive injuries and late season fixture congestion would probably make the dream double of survival and FA Cup a step too far. By the time a ball was kicked in the FA Cup final, just about every Latics supporter in the world had been asked what they would prefer: stay up or win the cup?

Though a complicated question, the answer was never really in doubt. Thirty thousand people — three eighths the town’s population — coloured the town of Wigan blue for yesterday’s FA Cup victory parade, emphatically putting ignorant and outdated “rugby town” stereotypes to bed. They sang and cheered, and even drowned out their manager, on-stage with a microphone, with chants “Roberto Martinez, we want you to stay.” There was not a boo or a negative word to be heard — not at the parade, nor at the Emirates last Tuesday when the team was consigned to relegation. The enduring sentiment was and is one of sheer pride.

This is not to say that relegation doesn’t hurt. Football, and the Premier League in particular, is a game of fine margins. Matches turn on a single incident, and there were a host of them this season, that if reversed, probably would have kept Wigan up. James McArthur’s missed opportunity to seal the game against Swansea, Tottenham’s incredibly fortunate last-gasp equaliser at the DW, Joe Hart’s unbelievable save to deny Franco Di Santo — all recent — stick in the memory.

But relegation from the league was always a possibility — no, a probability — and has been for years. Sunderland, who finished three points above Wigan, signed Steven Fletcher, Adam Johnson, Alfred N Diaye and Danny Graham within the past year alone for a total of 30 million pounds. Fellow relegation rivals Aston Villa, for context, signed Wigan’s best player two seasons ago for 9.5 million and kept him on the bench for most of the campaign — next to 18 million Darren Bent. They could afford to leave them out because they’d signed a gem of a player in Christian Benteke for 10 million pounds the previous summer. Newcastle spent more than 25 million this season. Southampton almost 33. Wigan’s total spending amounted to 9 million on four players, all of which were covered by the sale of Victor Moses to Chelsea. Conor Sammon’s 1.2 million deal to Sheffield Wednesday earned the club a net profit on transfers, something none of the aforementioned achieved. (Source: http://www.transferleague.co.uk/)

The good news when it comes to league status, as Martinez has said, is that it can be rectified. Not many teams bounce back up to the Premier League immediately following relegation. But not many teams that go down were living within their means during their Premier League stays like Wigan was. How many clubs have we seen promoted, overspend, get relegated and disband upon the realization that they cannot afford to keep paying the players they overspent on?

Sure, Latics will lose some of their stars — and those players deserve the chance to move to a top flight club. They were brought to Wigan on the promise that they would be allowed to move to a bigger club when the time was right for both parties. The stable financial footing Dave Whelan and Martinez have guided Wigan Athletic to means that they are not obligated to sell any of their players. They will, but only because it is beneficial to the club’s future. For every N’Zogbia or Moses — or this year probably McCarthy — that goes, four or five young talents are signed. Four such youngsters — Roman Golobart, Eduard Campabadal, Nouha Dicko, Fraser Fyvie — are likely to play big roles next season and cost Whelan very, very little.

A popular claim at the moment says that league status is temporary while trophies are forever. While certainly true, it does not quite sum up Wigan’s emotional season, or explain the absoluteness of their fans’ pride. If it had been QPR that had won the FA Cup but been relegated, it is highly doubtful that the overwhelming feeling at their parade would have been one of pride and progress. Their team has been messily run since being promoted two years ago, thrown money — a lots of it — at the problems and assembled an overpaid, overrated team of opportunists who will likely be sold off auction-style during the summer as they try to slash the astronomical wage bill they’ve created for themselves.

With apologies for harsh words to supporters of QPR, the point is that celebrations at yesterday’s parade were not solely focused on the amazing, unimaginable fairy-tale story of little Wigan spectacularly toppling the richest team in the land and defending league champions to lift the oldest football competition in the world. They were an acknowledgement of how far Wigan Athletic has come as an institution and the work of the last decade. The team will play in the Charity Shield and Europa League for the first time next season. A product of the youth and reserve squads was named man of the match in the FA Cup final. The New York Times has featured the Latics three times in the past month. Thirty thousand people came out to support the team. State of the art training facilities are on the horizon. Wigan Athletic won the FA Cup. Wigan won the FA Cup. The Latics won the bloody cup!

Relegation may be a step back, but the infrastructure is in place to keep this club in the Premier League or thereabouts for years to come. Of course, much hinges on the future of the iconic hero of this Wigan revolution, from player in the lower divisions to the manager who lifted the FA Cup, Roberto Martinez. But for now, it is safe to say that despite going down, Wigan Athletic is on the up.