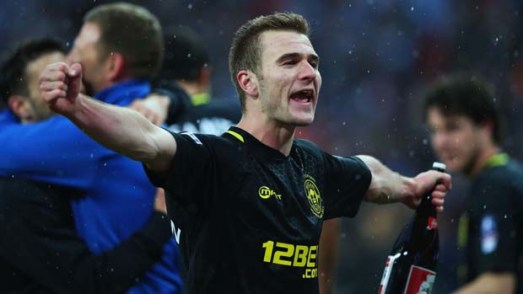 Callum McManaman could be the 20 goal striker that Latics have lacked.

When Uwe Rosler first arrived at Wigan he inherited a blunt strike force. Owen Coyle’s new signings just had not clicked and players remaining from the Martinez era were dogged by niggles and injuries. The shining light appeared to be provided by a loanee from Manchester United, but he was to fade as the season progressed. The end result was a forward line that just could not put away so many of the chances that were created. It was largely the lack of forward power that was to thwart Latics’ chances of getting back to the Premier League at the first attempt.

Some 10 months later Rosler has a strike force which has the potential to do much more. The question is whether it can realize that potential and propel Latics into contention for promotion. Can the two new central strikers adapt to English football? Can the key players Rosler inherited from previous managers achieve full fitness and consistency?

Both Andy Delort and Oriel Riera arrive with good goalscoring credentials from last season. Delort scored 24 goals in the French second division, Riera getting 13 in La Liga for a team that was relegated. Rosler does not favour a system with two central strikers, so the two are likely to be alternated. With the physical demands of high pressing, Rosler typically substitutes the central striker some two thirds of the way through a game.

Riera continues to adapt to English football following his move from Osasuna and his best is yet to come, although he scored a fine goal against Blackpool. Delort comes with the label of an English-style centre forward, but is going to need time to get match fit.

In the meantime, Marc-Antoine Fortune, remains an option. Fortune scored a paltry 4 league goals last season, but made 6 assists. The big man from French Guiana has never been a prolific scorer, but last year’s strike rate was only around a half of his career average. Fortune remains a handful for central defenders, being strong and pacey, with a good technique.

Martyn Waghorn has had slow start to the season, but made such a favourable impression when arriving from Leicester City on loan that he secured a permanent contract at Wigan. The 24 year old Geordie scored 8 goals and made 6 assists in the 28 league starts and 5 appearances off the bench. Waghorn was typically played wide on the right, but sometimes in the hole behind the central striker. Having started out his career as a central striker it continues to be his preferred position, but he is versatile and makes a major contribution to the high pressing that Rosler seeks.

Callum McManaman has had an excellent start to the season, following the frustrations of last year when he just could not hit a consistent run of form. There are few English players who can match him for skill when he is at his best. McManaman remains just 23 years old and is such an exciting talent. The irony for Latics fans is that once McManaman adds consistency to his game he will be the target of the elite clubs that dominate English football. A transfer fee between £20m-£30m is not out of the question.

McManaman could become that 20 goal per season striker that Latics have lacked since the days of Ellington and Roberts. Last season he was usually played wide and scored three goals in 19 starts and 13 appearances off the bench. He has already exceeded last year’s goal tally with four goals in his first five league starts. Moreover the goals have been superbly executed.

It is to be hoped that McManaman can steer clear of the injuries that have impeded his progress over the past year or so. Being a flair player brings him extra attention from opposition defenders and Rosler has already publicly stated his views that the player needs due protection from referees, which at times he has not had. In recent matches Rosler has adopted the 3-5-2 formation, with McManaman able to operate in a free role upfront. That role not only gives him more of the ball, but makes it harder for defences to mark him out of the game. Playing on the wing in a 4-3-3 formation will remain an option, but if Rosler is to get the best out of his key flair player he will need to look at playing him in a role that is not so restricting.

James McClean has not featured so far due to an ankle injury sustained in pre-season training. McClean was called into Martin O’Neill’s Ireland squad this week, but the manager considered him short of match fitness. McClean can be such an exciting player with his pace and aggression, but too often flattered to deceive last season. He has a career record of scoring a goal in every five appearances, but last year could only muster four goals in 25 league starts and 14 times coming on off the bench.

McClean and McManaman are different types of players, but with similar strike rates during their careers. Having had to play on the left so frequently during his career McManaman packs a strong punch with his left foot, although he favours his right. McClean showed that he can use his right foot to score goals at Ipswich last season, with a well taken goal from a cross from the right. Owen Coyle sometimes put him on the right, but he looked like duck out of water, seemingly too left footed to adjust. Rosler also tried him there without conspicuous success.

McClean cannot be faulted for effort, frequently helping out his full back and going forward on his marauding runs. At his best he adds enthusiasm to the team and can cause panic in opposition defences. The Irishman is still only 25 years old and his best is yet to come. Perhaps a switch from the left wing to the kind of free role that McManaman has been enjoying could open doors for McClean. The Irishman’s career record shows that he can score goals and make assists. If he can improve his finishing this season he will make a major impact.

Shaun Maloney can certainly score goals, as well as provide assists. Despite his lack of match fitness he has been called up for the Scotland squad to play Germany. At 31 years of age and an injury-struck career can the fan favourite make his mark on the season? Rosler certainly has him in his plans. Only time will tell if the Scot can stay fit and produce that same brand of skillful football that we have seen from him at his best. His combination with Waghorn for a beautifully engineered goal against Birmingham was a joy to see and whetted our appetites for what is to come. Maloney had spotted Waghorn’s run and laid the ball into his path for what appeared to be a simple tap-in.

Grant Holt’s future at the club remains uncertain. The player has had a nightmare time at the club and the abuse he has taken on the social media goes way beyind the norm. A fresh start at another club would appear to be the best case scenario for the player. But at 33 years of age, with his salary expectations, will it happen?

Rosler now has a much stronger strike force, with variety to match. His challenge will be in getting the best out of each of those players. With good service from midfield the strikers he has are capable of scoring lots of goals. We will then see the end of the goal drought that dogged Latics’ promotion chances last year.