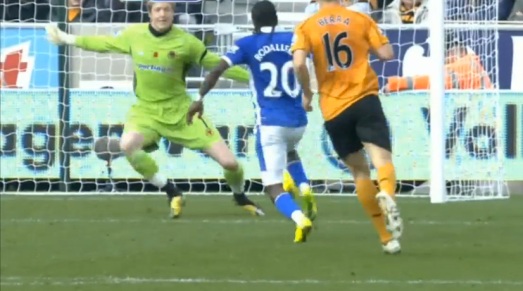 For several weeks now, we have sat down to write our match previews with relentless optimism (#keepthefaith), operating under the assumption that at some point in the next match, during a crucial moment, we would get a slice of luck.

This week, we finally did.

1-0 down, just before the stroke of halftime, Emmerson Boyce cleverly drew a penalty by jinking through a pair of Wolves defenders. Ben Watson stepped up, a visible bundle of nerves, and kicked it right at the keeper. It bounced back for an easy tap in, and Latics were back in the match. We finally got that bit of luck.

The problem was everything else. Despite playing far better football, creating chance after chance, Latics continued to single-handedly provide footage for the 12Bet.com How-Not-to-Finish instructional video. The man posing as Hugo Rodallega was culprit-in-chief, tamely toe-poking when through on goal early in the match before missing an absolute sitter — probably the easiest chance he’s had in a Wigan shirt — after chesting down a lovely Franco Di Santo pass with only the goalkeeper to beat. It visibly affected him, but he has cut a forlorn figure for quite some time now. With his agent talking up a potential move to Juventus, Latics Premier League goal-scoring record holder’s stay appears to be coming to a depressing end.

But it’s too easy to make a scapegoat out of the Colombian. Victor Moses was once again devastating in one-on-one wing play, but his final pass, cross, or shot simply fails to yield. The fear with him is that for all his raw talent there is no football brain, no vision. He holds on to the ball too long, keeps his head down when others are making runs for him (Dave Jones made an excellent one in particular after recovering the ball in Wolves territory in the first half), and shoots either too early or too late. This is harsh criticism for a young player who has been denied by posts and outstanding saves all season long, but it is what we’ve missed of N’Zogbia’s game. Coolness under pressure. Can you teach that?

Moving back to the defense. Gohouri was wobbly, while it’s hard to talk about Antolin Alcaraz’s performance after the spitting incident that will see him banned for the next three matches. Needless to say he didn’t have one of his better games. We can only hope a public apology is coming, and the incident doesn’t negatively affect relationships within an already distraught squad.

The way he is performing, it won’t be long before there is an Ali Al-Habsi statue in the town centre. The frustration he must have felt after his defense failed to clear three times before Dave Edwards hammered that second goal in must have been unreal. His agility and reflex saves are second to none in the premiership.

In midfield, Mo Diame and Dave Jones had decent games, and Ben Watson was solid enough. Latics passed well and had the better of the game. They are not the problem. If Diame continues to progress, he will no doubt be making the step to a bigger club sooner or later.

And so it has to be said — barring an astonishing turnaround, Latics look doomed. Last season, West Ham billed their home match against us their “Save our Season” fixture. They beat us, and then in the reverse fixture, we sent then down. The home fixture against Blackburn in two weeks time is certainly a must win if this season is to be saved. But then so was the last one. I’ll be wearing my lucky sombrero and moustache, but how great would it be if the team could put in a performance that didn’t need it?

Ali Al-Habi: 9 — Made a number of excellent saves, inspirational.

Emmerson Boyce: 6.5 — Won the penalty, did some good defending and got forward. But two of the goals came down his side.

Antolin Alcaraz: 5 — Was okay, until the spitting incident.

Ben Watson: 6 — Solid performance, was unhappy to be substituted which at least shows desire.

Dave Jones: 7 — Worked really hard and had an effective game in midfield.

Hugo Rodallega: 4 — Miserable. Missed a sitter and several other chances. Sad to watch him perform this way.

Franco Di Santo: 7 — If Rodallega has been up to it, he would have emerged from this match with a couple assists and a good energetic, committed performance as centre-forward. His own finishing should have been better when he had half chances, however.

Conor Sammon: 7 — Deserves a chance. Had a good effort and looked lively.

Albert Crusat: 6 — Did not assert himself on the game this time.

James McArthur: 6 — Not much to report.