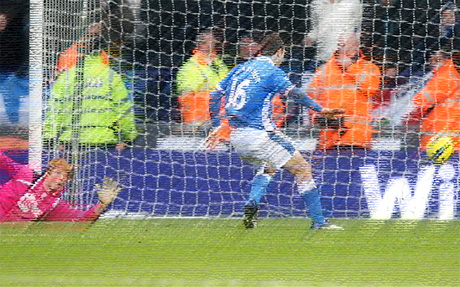 Wigan Athletic took a giant step towards revival (and survival?) with a 2-1 success over Bolton at the Reebok Stadium. A loss would have cut Latics eight points adrift and delivered a probably fatal blow to the side’s morale. Instead, the gap between the bottom five has been narrowed to an encouraging two points. Better still, the squad has a tasty fixture list coming up including three home fixtures against Aston Villa, Swansea and West Brom, with a trip to Norwich in between. Without getting ahead of ourselves, things are suddenly looking up at the DW.

Martinez’s men started slowly but started to take control of the match about 20 minutes in. Franco Di Santo, working hard up front with little service, received the ball deep and weaved before fizzing a powerful attempt just over and wide. Victor Moses embarked on a mazy trademark run, crashing a left-footed effort into the side netting (a trademark finish). Bolton’s approaches were largely limited to set pieces and hopeful shooting from outside the box, while Latics enjoyed the lion’s share of the possession. Pressure finally told when Gary Caldwell impressively beat David Wheater — who must have at least 5 inches on the Scot — in the air to power home a Jean Beausejour corner late in the first half. 1-0 Wigan at half-time.

The second half started in much the same vein, with Latics closer to a second than Bolton to an equalizer. A couple of penalty shouts that Howard Webb would have awarded Man United without second thought went unnoticed before Victor Moses spectacularly lost his man down the right flank and delivered the perfect final pass for James McArthur, who could only tap straight into Bolton’s Hungarian keeper’s arms. It was the kind of killer pass that Moses has so often been unable to pick out this season, instead going for glory himself or hesitating at the last second. Roberto spoke about the work they are doing with him on the training ground to address these situations in particular, lets hope it is a sign of things to come.

It was soon deja vu, and with the chance to go 2-0 up spurned, Bolton pull an equalizer out of a hat. The buildup was classic Bolton stuff — a mighty hoof from Adam Bogdan bouncing off the unwitting David N’gog’s back. But the finish was sublime, a left-footed thunderbolt from the underrated Mark Davies. James McArthur later expressed his relief at scoring the winner because Davies was his man. But there was little he could do on this one, and it spoke volumes of Jimmy Mac’s performance that he kept Davies quiet for the rest of the match.

The response was immediate. Latics went for it. With Rodallega now on the pitch, you could see a wave of Latics players pushing forward when Victor Moses broke free on the left and ran through unopposed. His low shot had enough power for the carrot-haired Bogdan to spill it straight into the path of the sprinting James McArthur. This time, the Scot made no mistake and you could see what it meant to the players as they celebrated in front of Latics’ traveling support.

There was a final scare when the impressive Ryo Miyaichi found space in the box after neat interplay and fired off a shot, but Ali Al-Habsi was at his best to deny him a debut goal. Latics created a couple half chances on the counter, but a confused-looking Rodallega made a mess of them. Latics’ defending was steady, on set pieces in particular — enjoying the extra height and defensive nous of Emmerson Boyce at right wing-back, in addition to the three centre-halves — and they held on for three points of gold.

The performance and result. They dominated, passed the ball well, Victor Moses created at least three goal-scoring opportunities from open play, and the defending was strong. The commitment and desire matched that of Latics’ spectacular season run-in last year. McCarthy and McArthur were lions in midfield, everyone played their part in a good team win.

The game should have been killed off well before Bolton’s equalizer, and it highlights Latics continued lack of confidence in front of goal. A better team — like Everton a week prior — might have punished Latics’ wastefulness. Jordi Gomez, there to provide that killer pass, was unable to create anything of note. Aside from Moses, the best chances of the game fell to Emmerson Boyce and James McArthur, hardly known for their finishing.

A Neutral Would Say

Latics were good value for the three points here, with Victor Moses in particular proving a headache for a lacklustre Bolton side.

Al Al-Habsi: 8 —  Didn’t have much to do, but made a match-winning save when called upon.

Gary Caldwell: 8 — Defended strongly and made the important breakthrough when Latics were struggling to find a way through.

Emmerson Boyce: 7 — A good choice by Martinez for a game of such importance. Provides less going forward than Ronnie Stam, but made an important contribution.

Jean Beausejour: 7.5 — Faded in the second half, but added another assist to his tally and was involved in much Latics attacking play in the first half. Proving a useful signing.

James McArthur: 8 — A selfless team player, he tackled well, distributed efficiently, and must have covered every blade of grass at the Reebok. The winning goal was great reward for his efforts. Has less in his arsenal than both Mo Diame and Ben Watson offensively but makes up for it in attitude. Very encouraging to see a midfielder busting a gut to get into goalscoring positions as he did twice in this match.

James McCarthy: 7.5 — Showed one moment of true class with a sharp half volley pass to Jean Beausejour in the first half. Fantastic work-rate, good distribution.

Victor Moses: 8 — Bolton couldn’t handle him. A constant menace, he created the winning goal and should have had an assist after serving it up on a platter for McArthur early in the second half.

Franco Di Santo: 7 — Did his job well, had a great effort from distance, but no real scoring chances.

Hugo Rodallega: 4 — Didn’t know what day it was. Looked confused when given the ball. A shame, because he found himself in good positions and might have killed the game off.