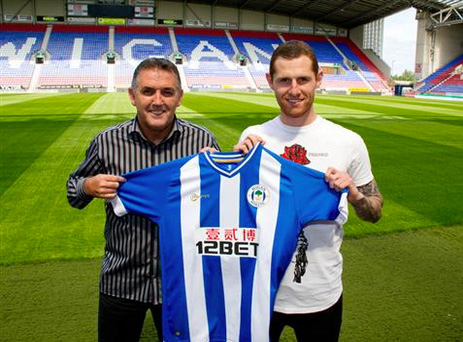 The first signing of the Owen Coyle era has been confirmed in the shape of 25-year-old Irish midfielder Chris McCann, who will join Wigan Athletic upon the expiration of his contract at Burnley, where he spent the past nine years.

The transfer virtually confirms Wigan’s intentions to cash in on their prize asset and fellow Irish midfielder, James McCarthy.

Though not a household name, McCann looks an astute signing. At 25 years of age (26 in July), his best years are in front of him yet he boasts an impressive seven seasons of Championship football. He is the type of player Wigan were never able to afford in the top flight: someone established who knows the division well, entering his prime years as a footballer. Today’s three-year deal should see him turn 26, 27 and 28 in a Latics shirt — peak years.

And while Coyle has a technically gifted midfield with players like James McArthur, Ben Watson, Jordi Gomez, Roger Espinoza, Fraser Fyvie, it is the athleticism of the likely-departing McCarthy that he would have struggled to replace internally. At six-foot-one and described as a powerful box-to-box player, it appears McCann is the man to do it.

Interestingly, the year McCann made the most appearances for Burnley was the year they achieved promotion to the Premier League. He then suffered a bad injury and was limited to seven appearances in the Premier League campaign. He has worn the captain armband for Burnley and having spent nine seasons with them, appears to be a loyal and committed player. His comments upon arrival at the club make for encouraging reading.

The hope now is that a McCarthy transfer will bring in at least 12 million pounds. Those who have watched his development over the last few years would likely value him at closer to double that amount, but realistically, 12 million would still be very good business. Potentially, Coyle could buy five good Championship players and still have money left over.

In a related note, news sources had suggested that McCann’s former teammate and striker, Martin Paterson, could be ready to follow. But earlier today, it was confirmed that Paterson had opted instead to join Huddersfield Town.

The other rumour doing the rounds at the moment involves a move for goalkeeper Scott Carson, who has made more than sixty appearances for Bursaspor in Turkey over the past two years but may fancy a move back to England. He seems to have been around forever but is only 27 and would be an excellent signing for the 400,000 pounds that are being mooted. With Ali Al-Habsi apparently set to miss the beginning of the season to injury (along with Gary Caldwell and Ivan Ramis) — Latics supporters will be hoping there is some truth to that nugget.