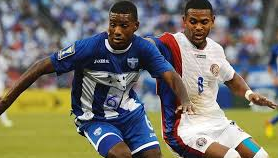 Juan Carlos Garcia (left) ready to step in for Latics.

When Juan Carlos Garcia was signed last summer it looked like he was going to be the natural successor for Maynor Figueroa.

Like ‘Figgy’ he was an experienced Honduran international, in his mid-twenties, who had come from Honduras’ top club – Olimpia of Tegucigalpa – with the ambition of being successful in England. He was to be another in the line of Honduran footballers at Wigan following in the steps of Wilson Palacios, Hendry Thomas, Figueroa and Roger Espinoza. Garcia got himself known on a world stage in February 2013 through a spectacular goal for his country in a World Cup qualifier against the USA, assisted by Figueroa.

Like Figueroa, Garcia is a left back who can also play in the centre of defence. The left back position has been problematic for Latics this season. Stephen Crainey played there at the beginning of the season, to be replaced by James Perch. That gave Latics more defensive solidity, but Perch was limited in attacking skills, playing on his ‘wrong side’. At times Owen Coyle would draft in Jean Beausejour at left back. The arrival of Uwe Rosler saw the Chilean being used more in that position, with Crainey rotated in as a wing back when Latics played with a line of three central defenders.

After six years at Blackpool, Crainey struggled to adapt to his new playing environment in the first half of the season. Being played at wing back relieved some of the defensive pressure on him and he started to grow in confidence.

Beausejour’s preferred position is wing back. Ironically when Latics have played with three central defenders it has been, more often than not, Crainey who has been played at left wing back. Apart from the occasional game on the left wing Beausejour has been played largely at left back, not his best position.

In the last two games the left hand side of Latics defence has looked vulnerable. At Burnley it was Crainey partnering Leon Barnett on the left, then it was Beausejour against Blackpool.

Rosler might well choose to revert to a 3-5-2 formation for the remaining two league games, bringing in Rob Kiernan as an extra centre back. However, if he opts to go for a flat back four he could do worse than put in Garcia at left back.

Figueroa made 148 appearances over five seasons for Latics and has been badly missed this season at left back. However, when he first arrived in January 2008 he had to wait months before making his debut as a substitute three months later. His first start was in the last match of the 2007-08 season facing Cristiano Ronaldo.

Garcia did not have to wait quite so long, making his debut in Latics’ 5-0 League Cup debacle at Manchester City in late September. Coyle played him in a wide position in left midfield. Since then he has had some injury problems, but has overcome them, making regular appearances for the development squad.

Will Garcia get his second chance before the season ends?