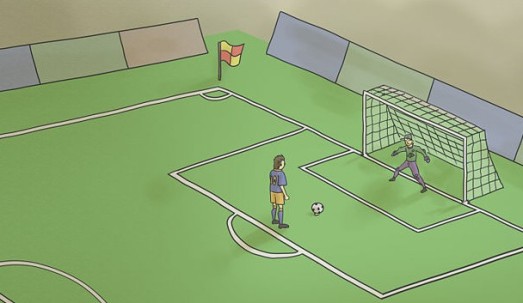 Can one single incident define a club’s season?

Blackpool fans might well cite Matt Gilks’ superb save from Martyn Waghorn’s penalty on Saturday as the event that saved them from relegation. Latics had been well on top in that first 20 minutes and if they had scored the Tangerines might well have fallen apart. Waghorn did not hit his penalty badly, but the goalkeeper guessed right and made a spectacular save.

Latics have been awarded 7 penalties in the Championship this season, of which they have scored 4, each taken by a different player. Grant Holt, Shaun Maloney, Ben Watson and Jordi Gomez were the successful scorers. Gomez has had two penalties saved, against Yeovil and Bolton. The opposition have converted 5 out of the 8 penalties they have received.

It was a surprise to many of us when Waghorn took the penalty against Blackpool. Despite his 1 in 3 conversion rate in the league this season, Gomez has a 100% record in cup competitions. He scored one in the Europa League and two famous ones – at the Etihad and Wembley – in the FA Cup. Having scored Latics’ last penalty in the pressure cauldron of an FA Cup semi-final it was expected that Gomez would take the spot kick against Blackpool. Moreover they also had Shaun Maloney who had previously been successful in converting penalties. Waghorn did have previous success as a penalty taker, scoring 2 out of 2 for Leicester City, but it was in the 2009-10 season. He had not taken penalties in competitive football since then.

The fateful penalty shoot-out in that Wembley semi-final continues to haunt Latics fans. If the likes of Holt, Maloney, Watson and even Waghorn had been at hand to join Gomez at the time, maybe Latics would have had a chance of beating Arsenal. But looking at the available players on the pitch at the time there was not much hope for optimism even before the kicks had started.

Should Latics reach a stage in the playoffs where penalties are going to decide the result are they going to be competitive? Uwe Rosler will surely bear this in mind with the players he has on the pitch in a game going into extra time. He will surely find time for his players to get ample penalty kick practice before the event.

Since the formation of the Premier League in 1992 the average conversion rate for penalties has been 85%. Less than 4% were missed, just over 11% saved.

During their eight seasons there Wigan Athletic received 28 penalties, of which they scored 22, a conversion rate of 79%. Ben Watson and Amr Zaki were Latics’ leading goalscorers through penalties, each scoring four. However, Watson also missed two, unlike the Egyptian who missed none and remains Latics most successful penalty taker in top flight competition. There were only two seasons when Latics received more penalties than they conceded, those being in the Steve Bruce era 2007-09. For the full stats see myfootballfacts.com

Gary Caldwell was the first to have a penalty saved at Wembley, but later stated that he had taken penalties before, even in the Champions League. The second taker was Jack Collison, whose shot was also saved. However, Collison had been successful earlier on in the season, scoring for West Ham in the 94th minute in a League Cup tie at Burnley.

Collison would not usually have a chance to take a penalty for the Hammers, as Mark Noble would usually take them. Noble has scored every penalty he has taken since 2009. Leighton Baines shares a similar record. However, Rickie Lambert has gone even better by scoring every single one of his 31 penalties in competitive matches for Southampton. Matt Le Tissier remains the most outstanding penalty taker in top flight English football in recent years, having missed only one of his 49 penalties.

Research into penalty shootouts in the World Cups, European Championship and Copa America reveals a success rate of around 87% for the first kick, 82% for the second, 79% for the third, 73% for the fourth and 80% for the fifth. See penaltyshootouts.co.uk for more details.

Clubs typically get an average of around four penalties in regular play per season and they are often taken by the same player. That is certainly the case for QPR, who have had exactly four, all converted by Charlie Austin.

However, the cases of other playoff contenders, Derby and Reading, differ. Referees have awarded Derby 11 penalties, of which they converted 7, but they have conceded only 2. They have used three penalty takers in Bryson, Martin and Russell. Reading have converted 7 of their 9 penalties, whereas the opposition have scored all 6 conceded. The Royals have used four penalty takers in Blackman, Le Fondre, Pogrebnyak and the unfortunate Sharp who missed his penalty against Latics.

Should Wigan Athletic get into a penalty shootout over the coming weeks it could well define their season. If Latics confirm their place in the playoffs then Rosler will surely give his players lots of practice at taking penalty kicks.