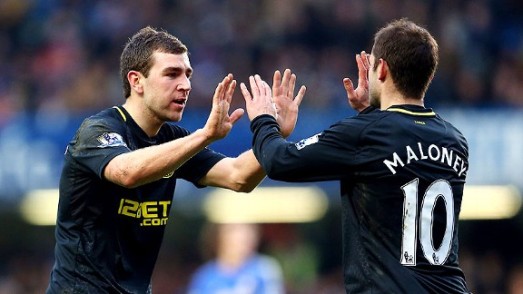 McArthur and Maloney – key players for a promotion push.

“Before the World Cup started there were a few rumours about McArthur and Maloney, but I have spoken to them and they know they are two of the cornerstones of the team. Both players will be massively important in my plans going forward and I made that very clear to both of them.”

It was heartening to hear Uwe Rosler this week dismiss transfer speculation regarding the two.

New signings apart, it is to be hoped that Latics will be able to resist approaches from other clubs for quality players such as Maloney and McArthur. Maloney was sadly missed last season and can play a key role, whether playing in “the hole” or in a wide role. Maybe we expected too much of him at the end of the season after a long layoff through injury.

Rosler will be hoping that Ben Watson and Chris McCann will be back in action following a double leg fracture and a damaged knee cap. Rosler clearly had faith in the midfield trio of McArthur, McCann and Watson. He had already lost Watson, when he lost McCann in the FA Cup win at Manchester City. It was McCann’s injury that proved to be the turning point and from then on results fell significantly.

One continues to ponder the future of Roger Espinoza, one of Honduras’ best performers in an albeit disappointing World Cup campaign. Despite being a fan-favourite Espinoza has failed to establish himself under three managers during his time at Wigan. He was played at left midfield for Honduras and looked effective in that position. Having been in the shop window during the World Cup it is possible that other clubs will bid for him. It will be interesting to see what develops.

Rosler continues to impress as Wigan Athletic manager. He has analysed the weaknesses in his squad and already made four signings, all of whom look like they can fit into the system the German likes to employ. They are already in training at the Latics camp in Germany.

Left back was a problem area last season, with wing back Jean Beausejour often having to play in that position, excellent when going forward, but sometimes unconvincing in defence. Stephen Crainey struggled to cope initially, but thrived when Rosler took some defensive responsibility away from him, allowing him to play at wing back. However, at 32 and on a one year contract it was unlikely the Scot would be staying. In their place Rosler has brought in Andrew Taylor and Aaron Taylor-Sinclair. Taylor is an experienced and very capable left back, who can also play left midfield. Taylor-Sinclair is clearly a bright young talent from Partick Thistle who might well follow in the paths of James McCarthy and James McArthur, who came from a similar type of background at Hamilton.

The signing of James Tavernier from Newcastle gives Rosler more options at right back. James Perch is an excellent defensively and over the course of last season he improved greatly in his attacking. His goals at the Etihad and Loftus Road showed his willingness to thrust himself forward. When Ryan Shotton left in the New Year Latics were short of options at right back, Emmerson Boyce having been drafted into the centre of defence. Perch continued to be the consummate team player, sometimes playing when he was not 100% fit. In Tavernier, Rosler has a more attacking option and the young player certainly has some flair.

Oriel Riera might well prove to be an inspired signing. Although he has spent most of his career in the lower leagues in Spain he proved himself last season in the La Liga first division at Osasuna. There was speculation among supporters that Dave Whelan was going to get out his cheque book and spend big money on a couple of quality strikers. However, Whelan was unlikely to undermine the wage structure that was in place and he is unwilling to pay over-inflated transfer fees for English-born strikers. Riera fits the bill. Another foreign-based striker remains on the cards.

There is a strong likelihood that more of the players remaining from the Premier League days will leave over the coming weeks. Jordi Gomez has already gone and Jean Beausejour will move soon. Ivan Ramis is Latics’ best centre back, but his high salary and questions over his fitness lead us to believe he will be on his way. One of the goalkeepers too is likely to depart. There has been no statement from the club regarding a new contract for Gary Caldwell. The Scot has his detractors, but if fully fit, he could be a force in the Championship.

A lot could happen over the coming weeks, but Rosler clearly has a plan forward. Under his astute management, promotion is a distinct possibility.