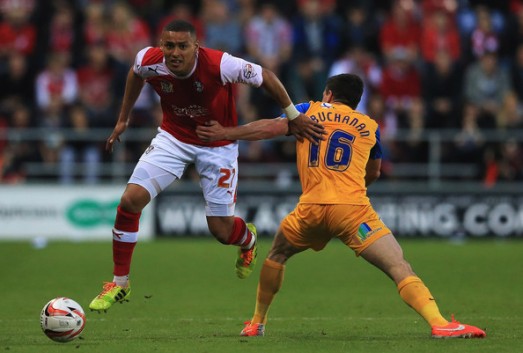 Over the past week Uwe Rosler has taken his number of new signings to four, with the acquisition of James Tavernier and Oriel Riera.

On signing Tavernier the manager quoted: “James is a player I have been tracking for a long time, dating back to my days at Brentford. He proved last season what great potential he has by being part of a very successful Rotherham side throughout the season and also in the play-offs. He will bring great competition on that side of the field, he is still learning and, at just 22, I feel that we can provide the right sort of environment for him to grow and develop into a really important player for this club.”

The Bradford-born James Tavernier was part of the Leeds United youth system until moving to Newcastle United in 2008. He was to make his debut for Newcastle United at the age of 17 as a substitute in a League Cup game against Peterborough. The following season he started his first  game in another League Cup tie against Accrington Stanley. That same season he was to make his one single Premier League apperance, as a substitute against Reading. In January 2011 he was loaned out to Gateshead and further loan periods were to follow at Carlisle, Sheffield Wednesday, MK Dons, Shrewsbury and Rotherham United.

Tavernier’s track record is not impressive, but he is clearly a player who Rosler believes has the potential to develop into something special.

That last move, to Rotherham, was clearly his best and Tavernier made 27 appearances for the Millers, scoring five goals, despite predominantly playing at right back.

22 year old Newcastle full back James Tavernier joined Rotherham United on an emergency loan deal in November which was later extended for the rest of the season. After relatively unsuccessful spells at MK Dons and Carlisle United among others South Yorkshire was where his career really took off.

Tavs instantly became a fans favourite after his debut goal and performance in the 4-1 victory over Gillingham. With bags of pace and a rocket of a shot he can play in right and centre midfield as well as his preferred right back slot. What I liked about Tavs is he always gave 100% and he really seemed to care about the club, which is something loanees often lack.

His brilliant work rate and stamina allow him to make regular surging runs upfield and he really is exciting to watch. A set piece and long shot specialist, he scored a few beauties during his time with us (most notably a brace against Bristol City if you want to have a look on YouTube).

He has tremendous amounts of energy and his overlapping runs caused a lot of problems for opposition defences this season and led to many goals. His crossing at times can be wild, but that’s the case with most full backs these days. I can’t recall him having a bad game last season and his consistency was rewarded with two Player of the Month nominations and many people thinking he was worth a place in the League 1 Team of the Year.

He very rarely missed a game for us and was an integral part in the best season in our club’s history. He and the fans got on like a house on fire, with mutual respect seemingly remaining between the two, despite his choice to turn us down.

His attacking nature can often leave the defence exposed and he has a tendency to get caught out of position. To be honest, I believe he’s far better going forward than he is defensively and may be suited to a more advanced role. Also his decision making at times can be slightly suspect, with him regularly blazing ambitious 40 yard strikes into the crowd.

However, Tavs came on leaps and bounds in his first year of consistent game time and I’m sure he’ll continue to do so. He will be a Premier League player in the not too distant future – either with or without Wigan – and I wouldn’t be surprised to see him represent England one day. That’s how highly rated he is around Rotherham.

There are no hard feelings between Tavs and the Millers and I am sure he’ll get a standing ovation when he visits the New York Stadium, with a rendition of his song “Ohhh we’re half way there, ohh James Tavernier” ringing out from the North Stand.

Fantastic signing for Wigan and a massive mistake by Alan Pardew. If you want to see him in action check out this montage of his performances last season, which highlights how good he was for the Millers.

I can only thank him for his part in a season that was beyond our wildest dreams. All the best, Tavs.