In the 89th minute with the score 0-0 Michael Jacobs put in a right footed centre from the left wing. It went way out of play, epitomising the final touches in Latics’ approach work.

Neither team played much football and a draw was a fair result. It will hurt Luton far more than Wigan, given their position. In the end Latics settled for a draw against the bottom-placed team, unwilling to push players forward to get a victory that could have put them clear of the relegation zone, at least temporarily.

It was an awful game, with football the loser. Gone was the flowing football we have seen in recent games. Predictably, given past performance, it was largely long-ball from Latics, which put little pressure on Luton’s defence. Their centre backs had a comfortable time as they and Croatian goalkeeper, Simon Sluga, gobbled up the hopeful crosses that Latics put into the box.

This was an acid test for Paul Cook. Once again, his team selection, substitutions and tactics pointed to a “not to lose” approach. It was so depressing after the invigorating performances that preceded it.

Playing not to lose can be justifiable when playing against teams of higher technical level and achievement. Against the bottom-placed team it was not appropriate.

That was as gutless as it can get. Horrible to watch. Players don’t seem to have the character to step up in 6 pointers. Players need to learn how to man up in pressure games. Only positive we didn’t lose and have not conceded in just over 360 minutes of football.

Back to Lowe and Massey floating around with zero effect…. I really do blame the manager for this no energy, no pressing, sit back for the draw outlook. Overhit crosses and sh.t corners it was atrocious to watch. Only Morsy and the defence came out of that well.

It felt like normal service at home had resumed…..very little threat on goal, carrying a few passengers, a distinctive lack of fight & desire given that this was a 6 pointer. We seemed to go into our shell despite the confidence that should be in abundance after our recent performances. Such a shame cos Luton have to be one of the worst sides I’ve seen at the DW this season & given what 3 points would have done for us is a big loss.

Really disappointed with Luton, thought they would have come and give it a go. Probably worse we’ve played for 7-8 games, our final ball was awful from both flanks. Let’s put it down as a bad day at the office, probably best way to look at it.

I think Luton and Barnsley are doomed, its then one from about 8.

Made in Wigan on the Latics Speyk Forum commented:

Whilst the performance was pretty much as I expected I thought we’d be narrowly be beaten so a draw was a bonus to a degree. I don’t buy that Luton did a job on us- they really needed to beat us and never looked like doing so. They were shite, so were we, but a point to maintain that gap is better for us.

As I thought beforehand we were too concentrated on not losing as opposed to having the desire to win, Typical Cook in a 6 pointer so whilst I’m not surprised I’m not too disappointed either. Balogun and Morsy played well but other than those two there wasn’t much to be enthusiastic about. Take a point and move on.

Absolutely bloody awful game. I’d really struggle to think of anything to put in highlights.

Luton are the worst team I’ve seen. Literally no quality whatsoever… How we can beat Reading by three and best Leeds and WBA away, then not beat them is totally baffling. By what I saw today, they are a League Two calibre side. Not that we are stellar, but we should be beating dross like that at a canter.

That said, it’s kind of what I expected. We’ve played well in recent games, and the only thing we do consistently is be inconsistent, so we were more than due a poor showing. Just glad the opposition this time was so bad they couldn’t take advantage.

Grumpy on the Cockney LaticForum said:

Cook got out thought by Jones in that one and we are now back in the sh..t, it looked to me like he’s after 10 draws before today to get us over the line.

Not a good match at all but I am a lot happier than the Luton fans who could not understand why they seemed to be happy with a draw and wasted time all the match! Hull and Charlton seem to be on a steep downward spiral. Really think we will be more than alright come seasons end!! 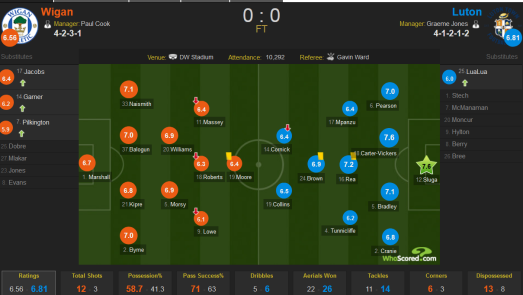