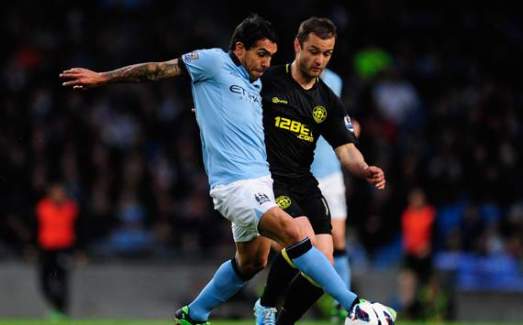 A very strong Wigan Athletic performance lacking only a goal ended in misery as a Carlos Tevez wonderstrike settled the affair with five minutes to go.

Wigan had been outstanding all over the pitch but more than once found themselves thwarted by excellent goalkeeping and defending at the crucial moment.

It is a cruel blow, but if ever a defeat could offer encouragement, this would be a good one to watch. For large periods of the match, Wigan out-passed and out-classed the defending champions on their own patch and deserved at least a point for their efforts.

Any concerns about the FA Cup being a distraction from league survival were put to bed in the first half, as Latics had earned two corners inside the first three minutes. Having reverted to the wingback formation with Franco Di Santo pairing Arouna Koné up front instead of a traditional right winger in Callum McManaman, Wigan enjoyed as much possession as their counterparts and without a doubt fashioned the best scoring opportunities. Di Santo was involved in two of them, first cutting his pass too far behind the on-rushing Koné, and then doing exceptionally well from a Shaun Maloney flick only to be sensationally stopped by Manchester City keeper Joe Hart.

Meanwhile, City were restricted to largely hopeful crossing although Paul Scharner’s struggles with Sergio Aguero and Carlos Tevez foreshadowed trouble. The midfield duo of James McCarthy and Jordi Gomez were neat and incisive and continued to fine tune their blossoming partnership. All in all, things were going very well indeed, though you got the feeling the missed opportunities would eventually prove costly.

The second half continued in much the same vein with a Maloney shot cleared off the line, followed by a sensational one-touch move involving Jordi Gomez, Maloney, Di Santo and Kone foiled by Vincent Kompany at the last second. City grew into the game as time went on, but Wigan threatened on the break and good running by McManaman — on for the injured Di Santo — could have done with a more assertive finish.

This was a team performance reminiscent of the golden run-in last year, on the defending champions’ home patch. The midfield was outstanding, the forward play was strong and positive, and the defending, save for Scharner who struggled throughout, was top class.

An opportunity lost, given the level of performance and chances squandered. Di Santo generally looked sharp and hungry but was unable to take his chance. A difficult loss to swallow.

Joel Robles: 7 — Not much to do in first half, but made a couple very good saves in the second — one from Edin Dzeko in particular.

Paul Scharner: 5 — Had a hard time. Got beaten in one-on-ones, notably in the build-up to the goal, and gave away possession on several occasions.

Antolin Alcaraz: 8 — Commanding, with some intelligent and controlled slide tackling.

Maynor Figueroa: 7 — Good shift from the Honduran despite making a mess of a very promising breakaway in the second half with an overhit pass.

Emmerson Boyce: 7 — Worked very hard defensively and had to cover for Scharner more than once.

Jean Beausejour: 7 — Though his crosses were not finished off, he got forward frequently and played a number of them, some very tasty indeed. Also disciplined in defensive duties.

James McCarthy: 9 — Dominant in midfield, he grew as the match went on. Complete performance.

Jordi Gomez: 8 — Looking ever more comfortable in the holding role with some good positive passing and good break-up play. Showing more urgency and forward passing in recent weeks, which is great to see.

Shaun Maloney: 8 — Another excellent performer, denied on the line with a curling effort in the first half, and should have been on the assist sheet with a clever flick for Di Santo in the first. Was a pest all night darting, weaving and threading passes.

Franco Di Santo: 7 — What a shame he couldn’t tuck that one away. Did extremely well to shrug off his defenders but telegraphed it. Still, it was an excellent save by Hart and the Argentine had a good game. Lets hope the injury is minor.

Arouna Koné: 8 — Confident and strong target man play, he was in the right place at the right time more than once only for City’s excellent defenders to make last ditch tackles.

McManaman: Looked confident when he came on and quickly created a good shooting opportunity, but failed to trouble Hart.

McArthur: Came on right after the goal and didn’t have enough time to affect the game.

A decent return of five points from three tricky opening fixtures, a positive defensive record of only one goal received, and a very successful transfer window have given Latics fans a lot of hope for the season. Unfortunately, the two trips no one wants at the moment are to the Manchester stadiums, and Eastlands is next for Roberto’s men. Manchester City’s last outing saw them humiliate Tottenham 5-1 at White Hart Lane, in what must be the London club’s heaviest home defeat in its Premier League history. New signings Aguero and Nasri appear to have turned City into genuine title-contenders — their squad is frightening, and on paper probably as strong as any other in the league. In transfer outlays, it’s probably twice as strong as the next closest.

I’m tempted to say there is nothing to lose in this one. No one expects Wigan to get a point, nevermind three. But as we learnt away to United last year, red cards to key players and high scoring losses are both things that can haunt you for the rest of the season.

The hope is that Steve Gohouri will have recovered from his groin strain to replace the uncomfortable Adrian Lopez in the centre of defense. I can’t see Lopez keeping Dzeko, Aguero, Tevez, Silva and company (not Vincent) quiet all game. There again, it’s hard to picture many centre-backs doing that, and perhaps Lopez will be more comfortable marshalling more cultured strikers than he was with the two big battering rams he’s faced so far, Grant Holt and Patrick Agyemang. Fingers crossed, but if Martinez made such a huge gamble on Alcaraz’s fitness against Swansea, he can’t have that much faith in his younger compatriot.

We’ll also be hoping Victor Moses and James McCarthy have recovered from their knocks and strains to be at their best. Judging by Roberto’s comments about the new trio, and in particular Shaun Maloney, it wouldn’t be surprising to see him play some sort of role in this match. Probably best to wait for a lighter match to give Crusat his debut, and certainly no need to blood the Chelsea youngster Van Aanholt as long as Figueroa is fit. I wouldn’t be surprised if Wigan start with the same eleven as against QPR (minus Gohouri, if fit), but add Maloney for Gomez or Di Santo in the second half.

The optimist in me says City will grossly underestimate us and we can go one better on last year’s excellent performance, to snatch a point. The realist says City are just too strong and the best we can hope for is a good defensive effort to keep the score low and morale high. Either way, a look at the arithmetic below makes it all feel better.